The store will not work correctly in the case when cookies are disabled.
Menu
Account
Settings
Language
Vestaplas

Free Next Working Delivery on all orders over £50+VAT

Free chocolate with every order

All prices exclude VAT until checkout

Exagus is a nutraceutical designed to support the normal gastric digestive of horses, particularly suitable for horses prone to gastric ulceration. It has a unique combination of 6 ingredients each of which contributes to the promotion of healing of the gastric mucosa. In line with the FEI Clean Sport Initiative Exagus does not contain any substances which are prohibited by the governing bodies of competitive sports within the UK. It can be used to reduce the incidence of recurrence of ulcers in horses where omeprazole or other pharmacological treatment has been successful.

Threonine is an essential amino acid in horses, meaning it cannot be manufactured from other compounds and must be obtained from the diet. Threonine is required for mucus production; it has been shown in other species that low levels of threonine will limit the ability of the stomach to produce mucus, which provides a protective coating to the stomach lining, thereby reducing the potential for formation of gastric ulceration.

Glutamine has been shown to reduce gastric ulcer under experimental conditions. It appears to reduce levels of inflammation and associated damage in the stomach.

Short chain fructooligosaccharides (scFOS), a fermentable fibre-type carbohydrate, have recently been shown to act as a pre-biotic in horses. They promote the growth of beneficial bacteria within the gastrointestinal tract and appear to stabilise the ‘good’ bacterial population in the face of sudden dietary change. It has been demonstrated that dietary supplementation with scFOS can increase the gastric pH and that should reduce the risk of ulcer formation (Respondek et. al., 2008)

Laminaria hyperborea, (brown kelp) is highly palatable, and the majority of horses will happily eat Exagus. It is available in free 1kg trial packs allowing its palatability to be tested before purchase.

In the study carried out by Hatton et. al. (2007) 17 racehorses on one yard were scored for severity of gastric ulcers. 11 horses were treated with Exagus at the recommended daily dose of 33g three times daily for six weeks. The other 6 horses were the untreated control group. No other medications were given and the horses all continued to follow the standard training and management routine on the yard. At repeat gastroscopy 73% of the treated horses had an improved gastric ulcer score, and the average ulcer score had decreased in the group treated with Exagus from 1.82 to 0.92. The average ulcer score in the untreated group had increased from 1.5 to 1.66, with 33% of horses showing a worsening of their gastric ulcers. This represents a statistically significant improvement in the treated group compared to the control group.

The recommendation to feed Exagus three times a day is based on the relatively short duration of action of the antacids calcium carbonate and magnesium hydroxide. 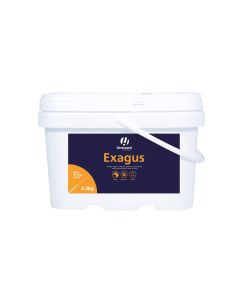 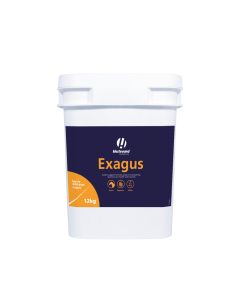 Delivering on our mission to be a greener business October 13, 2021
Latest